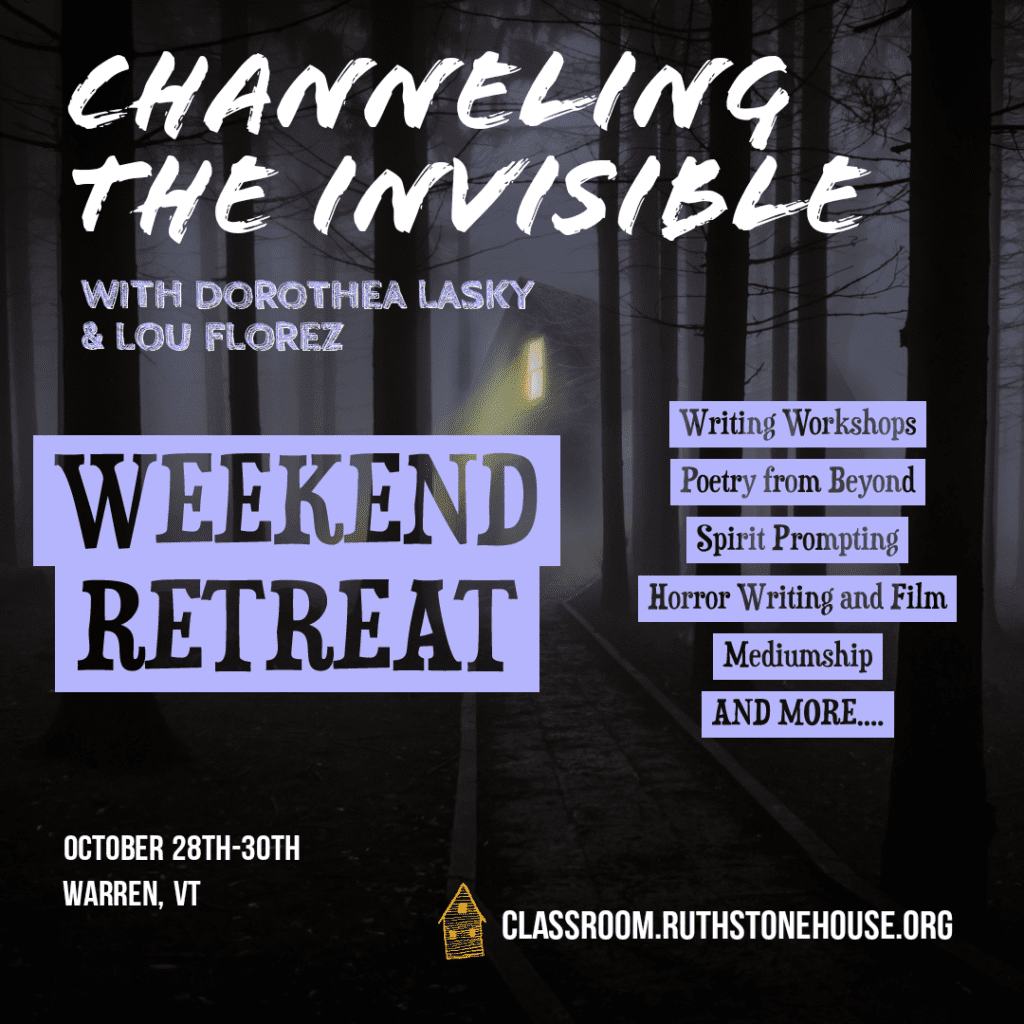 Channeling the Invisible: A Halloween Happening by WitchCraft

You’re invited to an exploration of the Spirits of Halloween with our community of creatives as we evoke the Unseen through the mediums of poetry, writing, art creation, vibration, channeling, witchcraft, and magical perfumery. Throughout this weekend experience, Dorothea and Lou will weave these fields together to create a doorway for the invisible to speak.

Broom Craft (Making Spirit Cleansing Brooms for Self and Home)

We have rented a large house in Warren, VT. Rooms and bathrooms will be shared. Food will be served on the premises.

Dorothea Lasky is the author of six books of poetry and prose, including most recently Milk and Animal, both out from Wave Books. She is currently an Associate Professor of Poetry at Columbia University School of the Arts, where she directs the Poetry program. 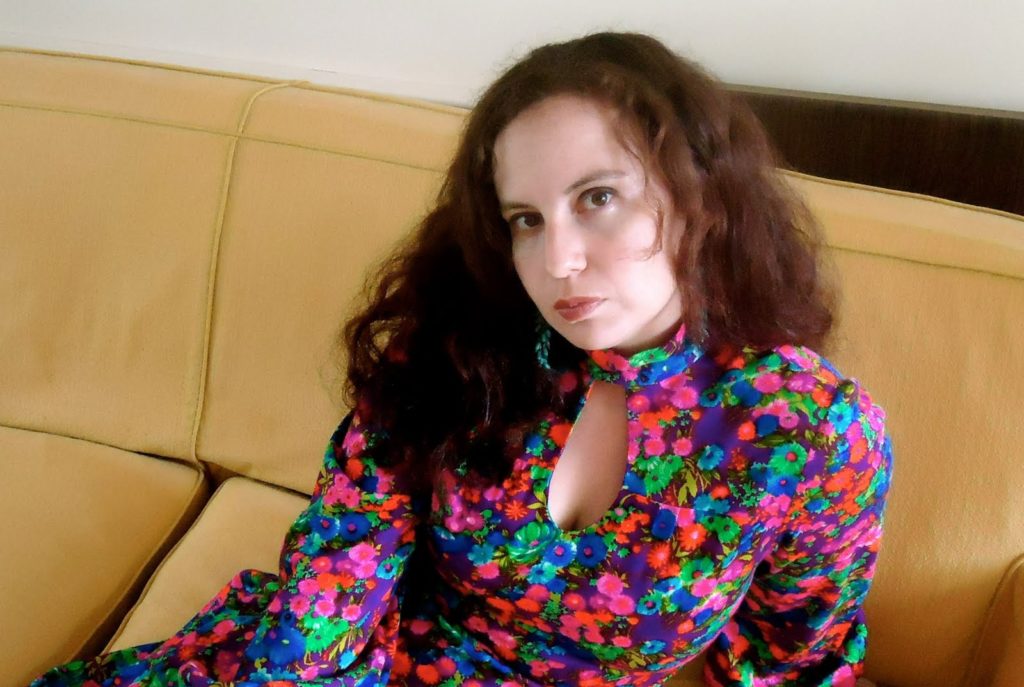 Lou Florez (Awo Ifadunsin) is a diviner and metaphysical reader who facilitates spiritual connectivity and transformational empowerment throughout his myriad roles as a Priest, lecturer, author, medicine maker, and activist. His work is inherently interdisciplinary and intersectional—bridging the fields of herbalism, ecology, divination, poetry, psychology, religious studies, gender and sexual studies, mixed-media art, and perfumery. Lou investigates the emanating Spirit present within all these fields and incorporates them into experiences that activate the Spirit within. Lou is the cofounder and executive director of Water Has No Enemy (WHNE), a nonprofit committed to healing justice. WHNE seeks to honor the timeless and enduring indigenous wisdom stolen from communities of color through centuries of slavery, colonization, and institutionalized oppression and reclaim it for today’s world. The organization offers a collaborative space for changemakers to explore healing justice because we believe that true healing occurs at all levels—from the individual and social levels to our relationship to the natural world. We promote services and programming that intersectionally addresses social change, community activism, and transformation through indigenous, Yoruba, and African diasporic perspectives.
Read More
As a Priest, spiritual adviser, and leader of an Orisha-centered community, Lou (Awo Ifadunsin) has served his temple, students, and clients with poignant care and profound generosity. Lou was initiated into Orisha priesthood (2007-2008) under his godmother Iyanifa Love Ifalade Ta’Shia Asanti and received his Itefa (high priesthood) in Ile Ife, Nigeria (2016). Lou was elevated by his elders to the position of a Presiding Priest for his spiritual congregation, Ile Ori Ogbe Egun (2021). Lou is also a diviner and card reader, spiritualist, and medium with a refined craft and a global audience (1998-present). He has studied and apprenticed with a number of elders in the southern United States and Central America, and he teaches divination and the oracular arts to aspiring mediums, budding spiritualist, and those interested in connecting to their inner selves through online and in-person classes, conferences, and events (2015-present). Lou is a folk-futurist herbalist—a term developed by Lynn Till to describe those schooled in traditional botanical medicines who work in tandem with science and scientific discovery—and spiritual worker who specializes in metaphysical medicine making, rootwork, brujería, witchcraft, curanderismo, and spiritual perfumery. Lou began this journey apprenticing with Mariah Prosper and Sharon Varner studying Western herbalism and witchcraft-based, esoteric spiritual traditions (1997-2012). He then did tandem study and apprenticeship in brujería, rootwork, and curanderismo (1999-2015) and was the Candle Deacon (2012-2014) providing candle setting services at the Missionary Independent Spiritual Church in Forestville, California. Lou is an author and creative who recently released his first book, The Modern Art of Brujería: A Beginner’s Guide to Spellcraft, Medicine Making, and Other Traditions of the Global South (2022, published by Ulysses Press and distributed by Simon and Schuster). His work “When the Goddess is Brown: Towards a Hermeneutics of Reparations” from the anthology Bringing Race to the Table: An Exploration of Racism within the Pagan Community (2015) has been taught by scholars of race and spiritualism and cited in articles on spirituality, witchcraft, and brujeria. As a featured columnist, Lou has written for Remezcla, “‘Penny Dreadful: City of Angels’ Offers a Heartless Vision of Santa Muerte” (2020), and The Wild Hunt, “Conjured Bodies, Transgressive Witchcraft, and the Politics of Resistance” (2017). Lou cofounded and facilitates WitchCraft (2020) with Dorthea Lasky. WitchCraft is a monthly online gathering that shares full moon happenings and consists of poetry and witchcraft experiments. Lou was also a creative consultant for Katy Perry’s Dark Horse performance at the Grammy’s (2014). Lou teaches, lectures, and creates experimental artistic-witchcraft spaces for transformative change. For the COP26, a People’s Summit held in Glasgow (2021), Lou collaborated on the presentation “At The Hinterland: a cooperative creative (pr)axis shift,” where participants experienced artistic encounters that uncovered their relationships to each other and the world during climate change. As we moved forward together, participants and presenters used what emerged from these encounters to cooperatively create elixirs for disruption, release, grief, solace, and radical imagination. Lou has been a guest lecturer and ritual facilitator at over seventy colleges and universities, conferences, and summits across the country, including Columbia University, NYU, UC Berkely, Stanford, UC Denver, Naropa University, Between the Veils Con, PantheaCon, Hoodoo Heritage Festival, and Conjure Crossroads. Lou creates workshops, daylong retreats, multiday retreats, and magical pilgrimages. Some of his most notable workshops and retreats include: · The Brujería Toolkit Intensive, Beginner’s Series (2018-2021) · Medicinal and Spiritual Herbalism Series (2018-2021) · IFA and Orisha Traditions of the Global South Summit (2019) · Decolonizing Botany, Traditions of Resistance and Resilience in Plant Medicines (2017) · Medicinas of the Heart, Creating Self-Care Toolkit in the Pandemic (2020-2022) · Contemplative IFA: Mysticism, Enlightenment, and Liberation within Odu IFA (2022) 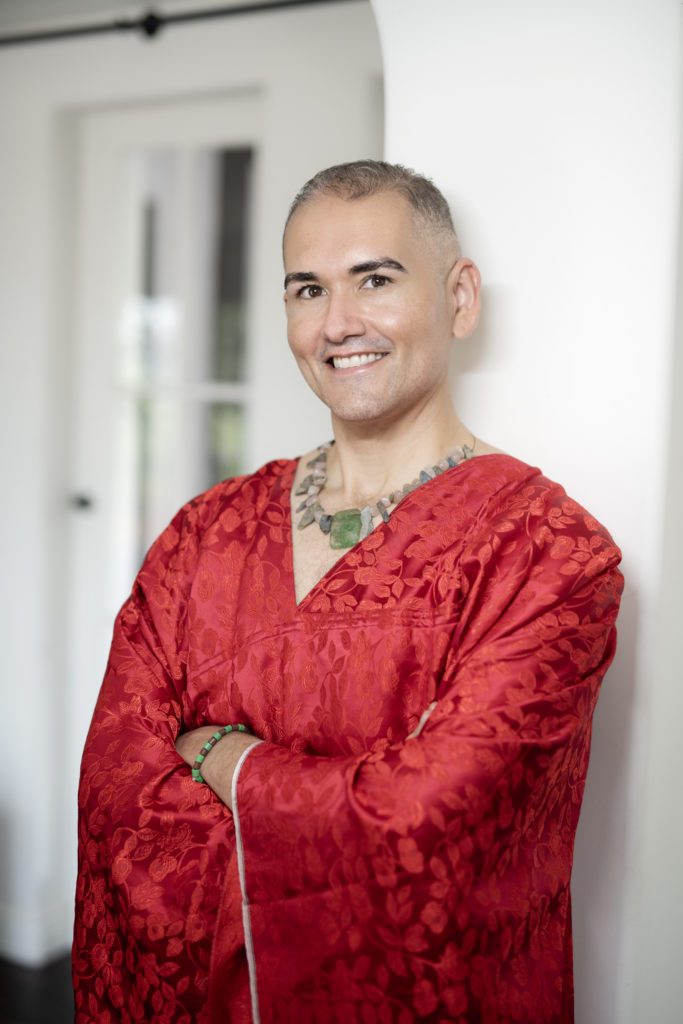 Virtual classes are usually based on video conferencing. At the moment we use Zoom. Instructors may utilize email as well as the specific ‘class page’ to share materials.

Each class is different, and Ruth Stone House allows a wide degree of freedom to instructors as to how they run their classes. If you miss a class or have technical problems you can request a video link to the class you missed.

In order to attend a Zoom based class, make sure you meet these technical requirements: Click here

We also require that you have access to email service to use Ruth Stone House Classroom.

FInancial aid is applied for on a class by class basis. Not all classes offer financial aid. There is a limited amount of funding available, and aid is awarded in the order received.

This financial aid form is for:

Channeling the Invisible: A Halloween Happening by WitchCraft

Includes: Full tuition, Room and Board at the Inn for a BIPOC poet

Includes: Full tuition, Room & Board at the Inn for a Poet of Color living in Vermont, or with roots in Vermont

Award for $600 reduced tuition for a BIPOC poet.